As a part of a research project, I visited a slum in Tirupati to observe how community toilets work there and record the need for these toilets.

Many houses in the slum were built using loan given by MEPMA under the scheme “INDIRAMMA“  launched by Andra Pradesh in 2006. This scheme aimed at building “cozy and modern looking houses with individual sanitary latrines ” in urban areas. The amount earmarked per house was Rs 42,750 which included Rs 2,750 for building toilets and Rs.40,000 for construction of house.[1]

As of 2012, under this programme, in AP, 90,000 houses were built without a toilet facility. In a move to ensure sanitation facilities for each house, the State instructed officials from the Housing Department to withhold payments for roof construction to the beneficiaries who fail to build individual sanitary latrines in their households.[2]

A major proportion of families living in this slum are daily wage laborers. Many houses lack access to toilets and resort to open defecation near the adjacent railway tracks. Some families have constructed a toilet outside their house in the premises where there was vacant area available. These toilets are of the pour-flush type connected to a septic tank. The septic tank is never cleaned which results in over-flowing during rainy season. This is a threat to the overall health and well-being of the community.

Some families have individual toilets inside the house, a part of this group consists of Government employees who could afford to build a toilet inside the house. The number of shared community toilets was also low. There was only one shared community toilet used by 9 houses.This private toilet block served over 40 men, women, and children, who paid a subscription fee of Rs. 20 monthly for access to the facility.

Clearly, several reforms need to be undertaken in the slum so that basic necessities such as water and sanitation are available. Building community toilet blocks that are clean, safe and affordable in slums can really help improve sanitation conditions of the urban poor. Community toilets can also be managed and run by the communities themselves which can lead to new livelihood opportunities for the poor. Construction and maintenance of these blocks by community based organizations will also instill responsibility, ownership and commitment towards the toilet facility.

Anku Bhardwaj, a mommy of a three year old, shares her thoughts with Hapee Commode on hand-washing as part of the guest blog series for International World Toilet Day

I care about sanitation because it helps me and my family to stay fit and prevent many diseases. Being a mother, I am concerned about my three year old’s health, and one of the basic things I can teach her at this age is to wash hands especially after using the toilet, after her playtime, and before she sits down to eat. Hand washing is the first line of defense against the spread of many diseases — from the common cold to other serious infections.

A song I found for parents to sing while helping their kids wash hands:

Germs on the Run, Run, Run

Germs On The Run, Run, Run

Water and sanitation are closely interlinked. For instance, toilets cannot function without water and without toilets, water bodies get contaminated in some way or the other. Therefore, solutions to water or sanitation infrastructure problems should be addressed in a comprehensive manner which combines both issues in a holistic manner.

Most cities and towns in India have a combination of formal and informal drinking water supply infrastructure consisting of government supplied piped drinking water and privately dug bore wells which we assume to be ‘clean’. But is it really so? Are municipal water treatment methods and indeed, any other commonly used water system robust enough to deliver clean drinking water? Probably not. These systems are plagued by intermittency, un-reliability and in many instances poor water quality because drinking water systems are not 100% leak free.

Our understanding of what’s actually in lakes, rivers, streams and ground water sources is limited and we don’t know if the chemicals (usually chlorine) added after treatment and before distribution is ‘cleaning’ the water of infiltrating contaminants before end use. In fact, unaccounted for water, which is defined as water lost due to leaks, cracks, thefts and water supplied to public stand posts, is estimated at 44% (average) by the Ministry of Urban Development. This, on one hand means tons and tons of water being wasted but on the other, more opportunity for infiltration from pipe bursts, cross-connections, poor sanitation practices and leaky sewer lines.

Drinking water and sewer lines next to each other and over a water source for down-stream agricultural users. Source: ATREE Summer Course Group 2015

According to a WHO study in Nagpur in 2014, contamination in drinking water (govt. supplied piped water) was due to leaky sewers, open drains and poor pipe condition. Nearly 10-11% of pipes were in the high-medium risk (from faecal coliform which originates in the intestines of warm blooded animals) category, proof that open defecation and poor sanitation infrastructure directly affects drinking water quality. Further, the Water and Sanitation Programme (2011) estimates that total annual economic impact of inadequate sanitation in India amounted to a loss of Rs. 2.4 trillion ($53.8 billion2) in 2006. The economic impacts were the equivalent of about 6.4% of India’s gross domestic product (GDP) in 2006!!

And, if this were not enough, health-related economic impact of inadequate sanitation was Rs.1.75 trillion ($38.5 billion), diarrhoea (especially in children) being the largest contributor – two thirds of the total health impact – followed by acute lower respiratory infection (ALRI). Open defecation and lack of sanitation are the leading causes for water-borne diseases like diarrhoea and stunted growth in children. Over 300,000 children aged below five years in India die each year due to diarrhoeal diseases. These are staggering and rather daunting facts that emphasise the seriousness of the situation. A situation which is characterised by in-adequate sanitation infrastructure, unclean sanitation practices which affect women and children the most.

What we really need now is detailed and accurate research which tells us what’s in our water, how it gets there and implications of existing contaminants on human health, wildlife and trees and plants. Only with this data can we really develop frameworks to treat the water in the best possible manner. Also, as the country develops, more and more towns and villages require ‘urban like’ water and sanitation infrastructure which must be designed jointly, compatible with the watersheds they exist in, operated efficiently to achieve the desired public benefits at reasonable financial, energy and resource costs and most importantly match economic geography and the evolving needs of households and businesses.

Akshaya Ayyangar is a researcher at IIT Madras and her research interests include life cycle analysis of systems particularly water and sanitation, water – energy – food nexus and water governance.

Toilets that are overused,

Toilets that are abused.

And make my eyes well.

With floors to make you slip,

Pinch your nose with a clip.

Any toilet that’s less than fine,

Mostly ones that aren’t mine. 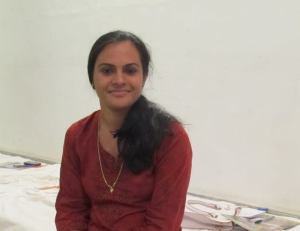 A successful toilet campaign does not end by just constructing toilets and creating awareness about it, but it should also have regular follow-up visits to the households to ensure that toilets are being used and are in functional condition.

Let us try changing our approach from Big to Small. Why don’t we take a small rural district in India, provide each and every household with toilets; also construct public toilets so that even visitors have access to toilets? Let’s do an awareness campaign and ensure that every household in the district is reached and that they are aware of the social and economic impact due to open defecation.

Do daily follow-ups to each household in the district and speak to them to find out whether everyone in their family is practicing it. Gradually reduce the follow-up visits from daily to weekly until it becomes a part of their lifestyle.

Sanitation programmes follow an “all or nothing” logic. Hygienic sanitation practices should be followed by every member in the society, for if not, the efforts put by others will also be in vain.

Create one success story and then take it to other districts

(A Tribute to A Dying Friend)

Through tears I gaze on thee.

The splashing! The flushing!

Such music to the ears!

To know that water flowed abundant,

Washed away our fears.

To see you all alone.

Of trees and walls has grown.

Are rivals to your fame.

But is it Parents, Children, Teachers?

Who can we really blame?

Your days are very few.

But when the call of nature comes,

I’ll always turn to you.